About three weeks ago Jo-Ann my ostomate got wishfunked. That’s my new word, it 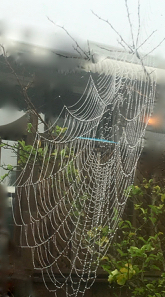 means Jo-Ann’s periodic desire to indulge in wishful thinking ran out of steam when a stone cold reality was tossed back into her life, literally and figuratively, and the ripple effect was both emotionally and physically profound.

Let’s start at the beginning. Many folks who have endured a lengthy illness, have gone through treatment, through the challenges of recovery, and in the case of an ostomate, there is now body function alterations created through major surgery. Then, there is the physical and emotional adaptation to an altered body that requires constant vigilance and ostomy equipment attached 24 hours a day, 7 days a week, month after month, year upon year. Well, we just can’t blame a person for indulging in periodic wishful thinking. It’s a much needed “respite bamboozle”, that calms the mind and soothes the soul.

That’s where Jo-Ann’s head and soul was when the pain started on the Saturday night. The abdominal discomfort intensified and the only position that somewhat relieved the pressure was the yoga “downward-facing dog bow” position. Jo-Ann is not a yoga practitioner, but through flipping and flopping from one position to another on the couch to find some degree of relief, she found if she went on her knees and laid the top part of her body down, and with her posterior up in the air, she could at least relieve some of the pressure and discomfort.

Hmm…what was causing all of this discomfort? Jo-Ann immediately began to be concerned about me her trusty and may I add amazing stoma. Her mind raced hither and thither to all the bad news potentials that could be occurring in her abdomen, and as we know there can be many.

After a few hours of her doggy bowing, the good news was the pressure lessened and she felt a degree of relief, enough relief to be able to go to bed and sleep for the night. Upon waking up the following morning, while not feeling her usual self, she did feel much better than the night before. That is until 7:00 p.m. that Sunday evening. The discomfort became so intense, even the yoga pooch position no longer helped.

The wishful thoughts that this too shall pass evaporated, and it was time to head off to hospital. It was midnight and Jo-Ann felt the full impact of being wishfunked.

The Doctor and nurses were terrific and professional as they worked hard to figure out what the source of the problem was. After intravenous, pain management, a CT Scan, and expert diagnostic application, the culprit was found. It was a kidney stone. The good news was the medical situation was not caused by me. The bad news, there is a stone, it is lodged in a most inconvenient spot, and Jo-Ann was going to be in a lot of pain until the offending stone moves. The good news is, it’s a stone and not one of the myriad of other abdominal, bowel or stoma complications. The bad news is, it’s a stone, it is painful, and it’s a stone on the move.

The good news is, the stone has moved to a more comfortable position now. The bad news is, it was not passed. There will be another dog bowing day sometime in the future when the stone resumes its journey. The good news-bad news, is life’s stress test!

As life would have it, Jo-Ann was exploring a social media site this morning, she read the following and thought you’d enjoy reading it was well.

While On This Ride Called Life

You have to take the good with the bad,

love what you’ve got and

remember what you had.

Learn from your mistakes, but never regret.

Just remember, the ride goes on.

“Everyone you meet has a story to tell.”

Why Buttercup Wears a BAG! – Click image for more info

BAGs Around the World – Click image for more info.

Better WITH a Bag Than IN a Bag – Click image for more info.

Another BAG Another DAY – Click image for more info